World-famous openwork lace, fragrant butter, carved colorful houses and the grandeur of the northern Kremlin
Contact us
Contact us

Oprichnina and the Brick

The Soul of the Russian North

The official date of the foundation of Vologda is considered to be 1147, in the same year Moscow was founded. Until the 15th century, the city was the cause of constant internecine wars between the Novgorod, Tver and Moscow principalities. Vologda turned into one of the most important transit trade centers during the reign of Ivan the Terrible: the goods were sent to Holland, England and other countries. At the same time, the construction of the Vologda Kremlin began, and in 1565 the city became the capital of Oprichnina. According to legend, Ivan the Terrible planned to move the capital to Vologda, but while inspecting the St. Sophia Cathedral under construction, a brick allegedly fell on the Tsar. Frightened by a bad omen, Ivan the Terrible ordered to destroy the temple, but, yielding to the requests of the Vologda residents, canceled the order and left the city.

The next period of the rapid development of Vologda falls on the reign of the Romanovs: in the era of Peter I, the city became a major military base, and under Catherine II, it became the center of the Vologda governorship. In Soviet times, the city became a fairly large industrial center.

Appearance of the city

In Russia, only a few cities have preserved their wooden block buildings, and Vologda is the first in this row. Here you will find not only classic Russian huts with carved platbands but also wooden Art Nouveau, Empire and Classicism. Most of the masterpieces of ancient wooden architecture can be found on Blagoveshchenskaya Street. 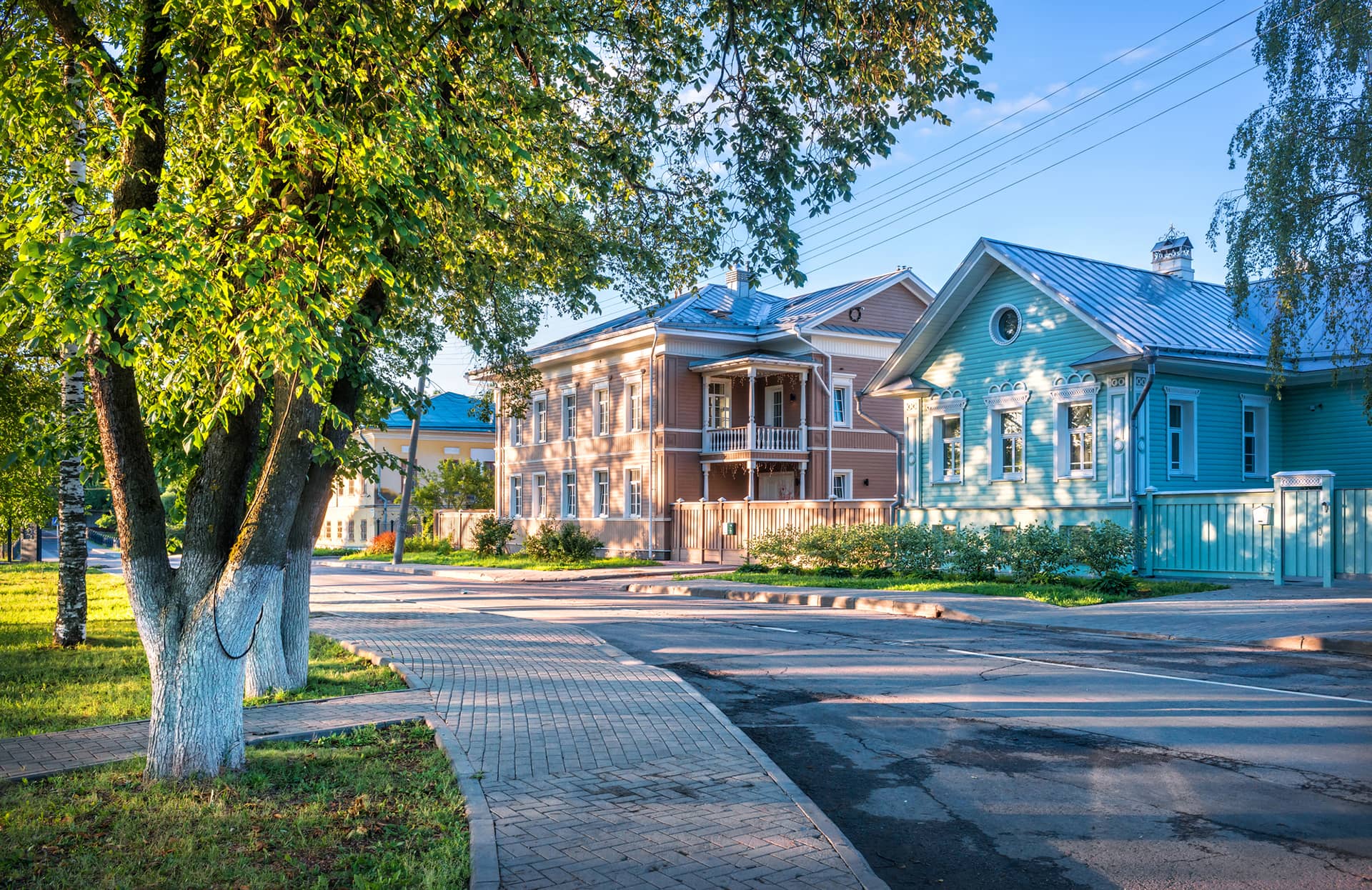 The Semenkovo Ethnographic Museum, located 12 km from Vologda, is also dedicated to wooden architecture. 25 years ago, the museum began with several houses, outbuildings and one wooden church of the 18th – 19th centuries. This is not a model: all the houses and the furnishings in them are real, the owners are known, and the stories are genuine. In the interiors of the beginning of the XXth century, master classes on pottery, woodcarving, and birch-weaving are held. It is worth coming here to learn how to whip butter and make folk toys with your own hands.

The craft that made Vologda famous not only for the whole country but for the whole world is, of course, lace making. Previously, it could take a craftswoman half her life to learn a pattern, so she usually weaved a monotonous lace. Vologda craftsmen invented the technology of invisible fastening of individual parts of the canvas, which made it possible to combine different patterns and create the thinnest canvases. The secrets of the craft quickly spread among the women of Vologda, factories and cartels were created. By the time of the revolution of 1917, 40,000 lacemakers were working in the city.

After the revolution, the question of whether the state needed such bourgeois and philistine art as lace making was seriously discussed. Therefore, in order to save their craft, the lace makers quickly had to change snowflakes for tractors, flowers – for the emblems of the union republics.
You can visually study the history of lace-making in the Lace Museum, located in the very center of the city, in an old mansion.

In the 14th century, 2 monks, followers of Sergei of Radonezh, Cyril and Ferapont decided to move away from the Moscow Diocese and settle in the North. Cyril dug for himself a secluded dugout on the shore of Lake Siverskoye, and Ferapont also settled a few kilometers away. This is how two outstanding northern monasteries appeared – Kirillo-Belozersky and Ferapontov.

The first one is impressive in its scale: it is among the largest monasteries in Europe. Be sure to climb its bell tower overlooking the majestic Siverskoye Lake and walk along the monumental brick wall. The Ferapontov Monastery is famous for the frescoes of the famous icon painter Dionysius, which can be seen in the Cathedral of the Nativity of the Virgin. 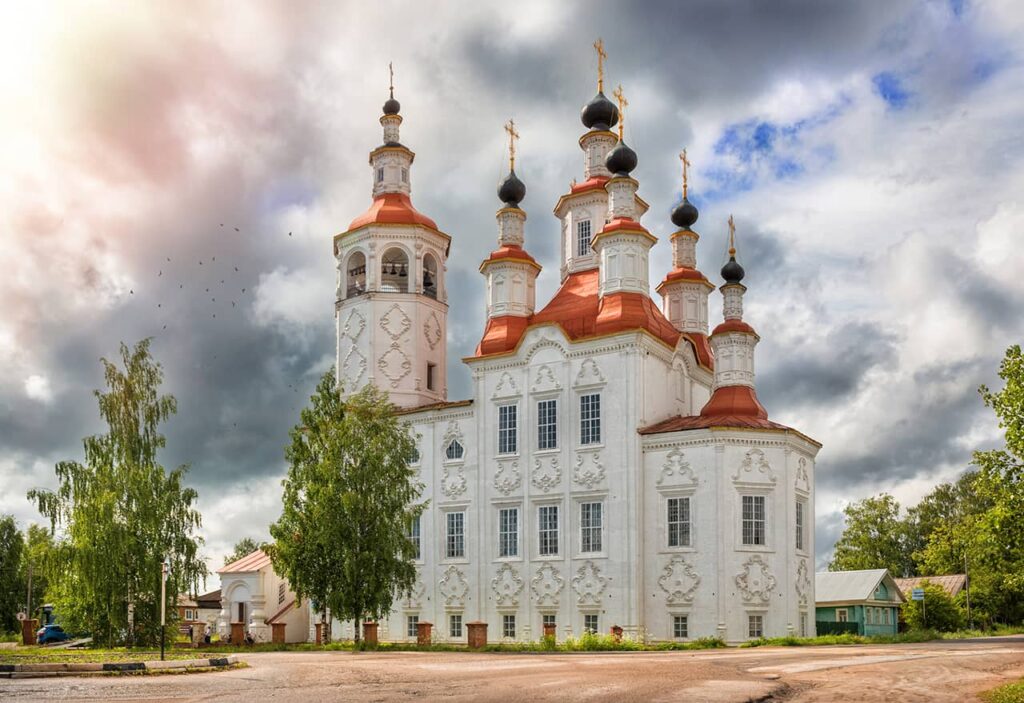 The Vologda hinterland has one more surprise for travelers – a city with its own unique style, Totma. The main decoration of the city is cathedrals in the style of “Totem baroque”. The buildings of the cathedrals are elongated in height and resemble sailboats in outlines. Cartouches – patterns on the facades in the form of unfolded scrolls, seashells, stars or maps – give them a special charm. Totma has more than 40 types of cartouches in total.

The Totem temples were built with the money of local sailors: at the time of Catherine the Great, it was the Totem merchants who equipped expeditions to get furs to the shores of Alaska. During these expeditions, a huge number of geographical discoveries were made, maps of previously unknown areas and islands were compiled, cities of “Russian America” were laid – in particular, the famous Fort Ross, the southernmost Russian fortress, built by the Totmich Ivan Kuskov in Northern California.